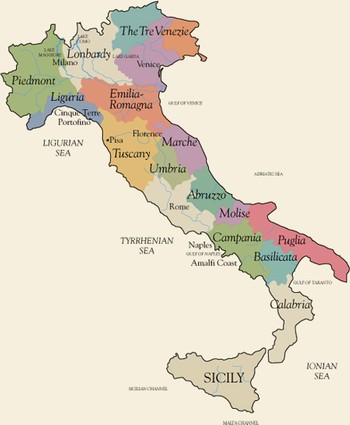 Round 3--A Tour of Italy

In the coming weeks we will be ready to ship a brand new mix, this time a sort of "Tour of Italy", with selections from some of Italy's most important regions and grapes.

With this six-pack we'll show off a mix of 5 reds and 1 white wines. The tour begins in Tuscany with a Chianti Classico, moves north into Piedmont for a Dolcetto and a Barbera, then heads east to find a red and a white from near Lake Garda. We finish in the very north, near the Swiss border, with a mountain red without parallel.

The Davaz' make only Chianti Classico, each of their bottles adorned with the famous black rooster (gallo nero) that signifies the denomination. In fact, local wine people come to their vineyard, the most well-known viticulturists included, and claim that their vines are among the best 3 or 4 sites in all of Chianti Classico. For sure they are among the highest, situated almost precariously on a forested mountaintop.

The wine is made in stainless steel tanks then aged for a year and a half in used barriques to add roundness and complexity. This 2017 is a complex, wonderfully woven wine with great finesse from front to back. The year was particularly warm and dry, and resulted in a more masculine Chianti than is typical from Poggio al Sole. A terrific bottle to enjoy with a nice buffet of cured meats and hard cheeses.

Their Barbera is plain glorious, filled with a jammy presence of raspberry and black cherry, and featuring a little kiss of salinity on the lips, yet more like a rich and concentrated wine with each subsequent sip.

This is a seriously rich and powerful Barbera. It comes from vines between 50-80 years of age, and shows off the concentration accordingly. A year in barrels followed by two more aging in bottle lend this wine a particular grace however.

This a white you'll not soon forget. Made from the local Garganega and splashed with salt and pepper varieties Chardonnay and Trebbianello, it is a lively, gorgeous white with that oh-so refreshing summery freshness that we just love. In fact, we tasted this over the winter directly from tank, and I there was just no way in hell I was spitting it in the trench drain. When Giovanna served up so nice fresh salami chunks, I was hooked.

Ettore is made a little like Amarone. Corvina is left to dry for a short time on the vine, almost 3 weeks. Then, when it's brought to the winery, Giovanna blends it with some Merlot for plumpness and roundness. I generally don't go for Amarone, but this wine was bold and complex without all that mouth-puckering tannin and stewed plum. Six years in bottle doesn't hurt either! A very limited production wine of only a few thousand bottles produced each year.

The young winemaker Marco Triacca is a handsome thirty-something Swiss Italian that inherited a few hectares from his father in 2009 and began his own winery a few years later. I would say that what Marco is doing is growing "extreme" Nebbiolo. There are no gently rolling hills here. In fact, the Valtellina seems only a few kilometers wide, flanked by steep terraces, craggy rocks, and houses that appear to jut out of the cliffs.

This is only the second time since 2009 that Marco has made a Riserva, and this one is a jaw-dropper. With only 3000 bottles produced, it is aged for three years (yes, 3. Not a misprint) in older barrels of varying sizes. Then it is stored for another 3 after bottling until Marco believes it to be ready for the market. The result is a miraculous, high-altitude Nebbiolo from Italy's most obscure appellation. A wonderful of example of beautifully aged red wine.