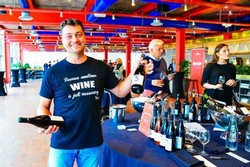 Pier Sfriso and Reka Haros are more than just Prosecco producers. In fact, I'd lump their reds into the mix of among the best of the Veneto region

Here is how Pier describes his Cabernet Franc, a mere 1300 bottles produced, in the third person:

This wine is one of Pier’s bets, he has always dreamed of making our red wines differently from what is common in our area. Why? Because he does not like how they are made locally. Red wines from our area are usually very light compared to other Italian red wines from Tuscany or Piemonte, so Pier has taken a very different approach.

This Cabernet Franc comes from a single vineyard and expresses the best of itself with an intense and unmistakable herbal scent. It is structured but at the same time very enjoyable. We love it with steaks, local salamis, and cheese, but some love it without food.