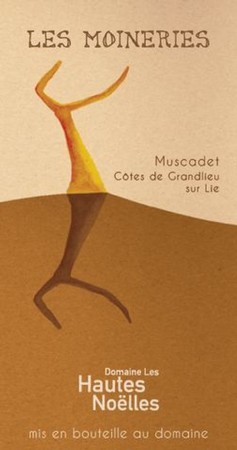 ​Les Moineries refers to a specific vineyard planted in 1932. But Jean-Pierre Guedon has have tended these vines via organic practices for just the past six years. It yields a Muscadet that truly reflects the characteristics of the vintage from which it came and is a throwback style of winemaking for the region.

The wine spends the first 2 years of its life in subterranean tanks, where the lees are stirred regularly, resulting in a rich, substantive white wine that belies the idea of simple, young, austere Muscadet.

There is more than a faint whiff of the sea in this wine. For sure, only a 30 minute dry to the Atlantic can explain this, but the oyster shell and minerally sea salt sensation in this Muscadet are enough to get the salivary glands into overdrive!

Muscadet is a region in repair. Nowhere does one drive around a wine region and see more abandoned vineyards than here. Wanna be in the wine biz? Start here by purchasing some 80-year old vines but then watch as your prices are driven down by a depressed market. Truth be told, this $18 bottle is the winery's TOP OF THE LINE offering. If we were in Sancerre or Chablis it might be triple the price!

Oh well, go buy some shrimp and oysters and have a ball with this limpid, tense, bone dry, super-fine white wine from one of Muscadet's best!