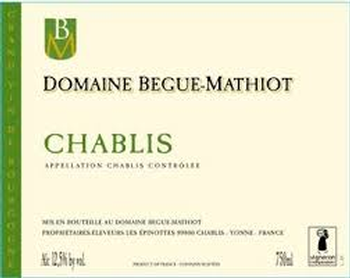 During my last trip to France I tried and tried to find a way through the door in Chablis. Instead, I found lots of dead ends. Seemingly, there aren't many NEW projects in Chablis like I find in many other regions in France. Most producers have relationships with importers already, and considering the volume of Chablis on the market it feels almost closed to outsiders. Ultimately I figured something would come up, perhaps in the outskirts of the appellation or some kind of up-and-comer.

But then the name of Guylhaine Begue-Mathiot came across my email, referred to me by another winery we're already working with. Guylhaine (Ghee-len, a hard G) was interested to meet us and we eagerly set an appointment. Her winery is about 3km from the very center of Chablis--hidden in plain sight!

Guylhaine's father Joel entered into Chablis proprietorship in the mid-80's, having worked for a decade as a tacheron, (a la tache, meaning: by the task), a common working contract among Burgundy viticulturalists. In 1985 he managed to acquire 3 hectares and along with his wife Maryse grew their holdings to 12 hectares over the next 15 years--many in Premier Cru Vineyards.

We tasted a lineup of truly wonderful Chablis with Guylhaine on a cool day about 6 weeks ago. She was quite shy and reserved, in some ways apologetic about her wines, and eventually admitted that she didn't think they would suit the American palate. Why? Probably because there's not a splinter of oak in the whole winery--each wine is vinified and raised in tank and bottled as early as possible to preserve freshness and brightness.

In other words, "Mr. and Mrs. Acid Freak" were very happy campers.