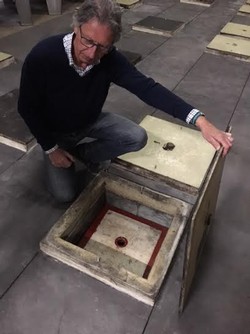 "Shall we go for oysters?"

This was the question that was posed to us after a terrific visit last week with Jean-Pierre Guedon at Domaine Hautes Noelles. We had arrived in Nantes earlier that morning and used an hour to stock up on weekend provisions--cheeses from Beillavaire, good bread, little fresh strawberries, leeks, radishes, and lots more. The Marché Talensac in the center of Nantes is a Loire paradise and we were particularly freaking out over the fresh fish, scallops, and of course, oysters.

So when Jean-Pierre asked us join him for lunch following the wine tasting, he happily added, "Shall we go for oysters?" Um...yes, please. Then, "I think I have an idea what we could drink to wash them down!"

So we arrived in Pornic, right on the Atlantic, and settled into big plates of Number 3's, served only with brown bread and Beillavaire's beurre doux, and slurped them down with a stunning white that in fact was Jean-Pierre's first--his Muscadet Les Moineries 2010. (he purchased Hautes Noelles earlier that same year)

The vintage is no misprint. I've been working on finding a bottle-aged Muscadet for you for over a year. And this one takes the cake. Here's why:

Jean-Pierre makes this wine in a very traditional style. First, after fermentation, it stays in underground tanks (pictured) for a little more than 2 years before bottling. (!) It rests there on its lees, occasionally stirred and gaining richness and complexity along the way. This sur lie aging helps make an often austere white wine rich and glorious.

But then, Jean-Pierre also ages the wine 3 MORE years in bottle allowing even further complexity to develop.

The result is a super-fine, thousand-layered Muscadet that unfolds slowly in the mouth and over the hour you might take to drink it. Drinking older, bottle-aged Muscadet is a must for any wine lover. I'd rank it up there with enjoying older Riesling, Vouvray, or Chablis.

To boot, Les Moineries comes from an old parcel of 80-year old Melon de Bourgogne vines that yield a very tiny quantity of grapes. This just furthers the concentration and complexity of flavors.

A new step was taken in 2010 when Jean-Pierre Guédon bought Domaine Les Hautes Noëlles. An entrepreneur with a passion for wine, Jean-Pierre has mobilized a young crew of competent and motivated workers around him in order to bring the domain to still higher levels of achievement. Domaine Les Hautes Noëlles is committed to a process of organic farming, and it's easy to spot his vineyards in the sea of chemically treated rows nearby. They stand out like no others.

Jean-Pierre's Gros Plant is our 'go to' Loire white when asked, "Do you have a super crispy, bone dry, laser focused white laying around?" Game. Set. Match.

The He-ho Blanc is a playful Val de Loire white wine made from the nearly forgotten Grolleau Gris. A wonderful pink grapefruit aroma leads to wine filled with exotic fruits, Asian spices, and a touch of white pepper

The He-ho Rouge  blends co-fermented Grolleau and Gamay with traditionally fermented Cabernet Franc. Its a wine I really wanted to hate, but couldn't. Normally, red wines from this part of the Loire are green, weedy, high acid and screechingly austere. But here I found fruit, warmth, and juiciness. Wow.